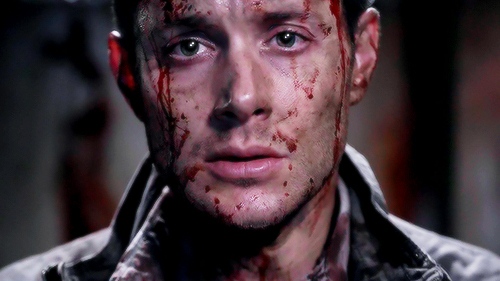 Well we knew that a midseason finale wouldn’t be an easy watch, but that doesn’t mean that the writers didn’t try to make us think we might have a chance.

The writers slowly hacked away at our hearts throughout this episode starting with this:

After a flash back/ dream about mass murder we see Dean laughing to some Three Stooges while Sam brings him a sandwich. We see the two of them together, happy, and they even throw in a little moodiness for Sam to make it feel real. This is what life should be. Even as hunters they should just be dealing with the next monster and then celebrating over a beer. Instead we’ve seen horrible things from both brothers and times where they couldn’t even talk to each other. It feels great to be right again. Which is just further proof the writers are messing with us.

We see Claire abandoned. Father dead, Mother gone, Grandmother also dead. So now she’s a troubled teen who shoplifts for a creep. Not just any creep, but a manipulating creep that doesn’t care what happens to her. Claire has perhaps lost the most in this situation. She was young when Jimmy invited Castiel in and she was safe. She had a mom who cared for her and a dad who cared about her. She was fed, clothed. and looked after. She then got shoved out on her own knowing that there was an angel out there somewhere that had taken her dad from her without a second thought about what that did to her world. Even though we know that Castiel really wants to help her we get why she is mad at him and why she doesn’t want to trust him. Hell I know his motives and I still don’t trust that he will do what’s right for her. He can’t give her the home she wants and if he drags her along for the ride with the Winchesters that’s a whole other evil.

Castiel in a tie

We finally see Castiel in his tie again. Well in a tie at least. I’m surprised at how much I have missed it. The absence of the tie seems to symbolize the lack of a purpose. His other tieless moments have mostly involved him being insane. We get to see a glimpse of his old self this episode. I mentioned that the writers were wanting to break us down right?

Sam and Dean’s apathy with the Claire situation

Dean’s never been one to care about personal issues, but seeing Sam tell Cas “so what” about the Claire situation shows how far from doing good no matter what they’ve come. Yes they are right. What good with Castiel do for this girl? He’s more likely to harm her than help her, but that wouldn’t have stopped Sam in the past. He would have wanted to make sure that Claire was safe whether she wanted to be or not.

Dean asking Cas to take him out

When Cas questions Dean about the Mark messing with him he responses by asking Cas to kill him if he goes dark again. I don’t think that Cas is the one to do this for him, but he knows Sam won’t do it. I wonder if Cas really will. Destiel or no Cas does care about Dean and he knows that on the most basic level Dean wants to do good. He wants to help and protect people from the forces of evil. He just doesn’t know how to protect people from himself.

Crowley getting played by his mom

Watching Crowley complain about his mom was hilarious (Nobody cares Gerald), but we see yet another family with issues. Crowley may be the King of Hell, but he was a little boy once. A little boy that was almost sold for some pigs and was abandoned to figure things out for himself at age 8. The boys attempted cure comes back to bite him again as he is manipulated by his mother. She plays him like an expert and gets what she wants in the end. I wanted to scream at him through the TV telling him to not trust her. Of course don’t trust her– really?? Crowley should know better– demon cure or no.

Castiel finally figures out that he needs to become more active to find and help Claire. He is wracked by guilt over taking her dad from her. He at least stops her from robbing a store, but gets pushed away again. Of course he takes her at her word about not wanting his help again and has to have sense talked into him by Sam and Dean. I was so thrilled to see him get it done during the final rescue sequence. We saw for a moment again that powerful/scary angel from past seasons. And it was glorious.

Sam and Dean talking about John

They tell this messed up story about Dean sneaking out to a club underage and getting drunk. He gets caught by his dad and embarrassed and proclaims his everlasting hatred to his dad. His dad that we all know he spent most of his life idolizing. This is yet another moment of sweet sadness. It’s been a long time since we’ve heard the boys talk about their dad much less tell a story about him that didn’t involve killing something. Dean ends the story by commenting on how his dad raised him right. I wonder what his dad would think of everything that has happened to the boys since his death.

Claire’s realization of Randy’s betrayal is just another sad moment in a long list of sad moments. She has stuck by this creep the whole episode rejecting Castiel. She finally sees that Castiel really is trying to help her and that Randy just sees her as an income stream.

Dean going Alpha on everyone

Dean lingers a little too long during the exit from Randy’s house and– ooooops– just happens to slice everyone to pieces. You know how that can happen. I wasn’t so much surprised by his actions but by his reaction. He knew as soon as he saw what he had done that he had done something horrible. His look of complete shock and sorrow said it all. However, Sam’s reaction was 10 times worse. All he wanted to hear was a reason to rationalize away Dean’s actions and that isn’t at all what he got.

How will the boys handle this? Will Cas try to fulfill his promise to Dean? What are they going to do with Claire? Will Sam deal with this better than Dean dealt with Sam’s demon blood problem? So many questions and over a month until we find out. 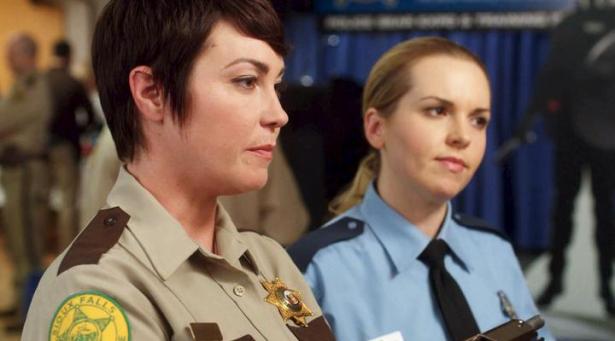 Jody is back again!  Jody is one of the few good guys left. Bobby is gone, Garth is a werewolf, Jo and Ellen are dead, Ash is off controlling Heaven and Kevin Tran. . .well I’m not trying to cry today. Jody is a tie back to the time that they had a good support system.  Now when they need help they have Jody, Cas or Crowley. Sooooo yeah Cas isn’t the most stable and Crowley is the King of Hell so they aren’t exactly the best people to have back you up. Except Jody. Jody still sees things in Good vs Evil and yeah she’s open to converting evil (like adopting an ex-vampire as a daughter), but she’s not gone full dark side like the boys.

It refreshing to see the boys interact with her and with Donna and remember it’s not always demons and Knights of Hell and all that. Sometimes you just get to kill a vampire. The writers have done a great job setting up the potential for a spin off (which I feel like could have been done after the last Jody episode) and they could even bring Donna in on it and I wouldn’t complain. This feels natural unlike the attempted Bloodlines spin off. Of course I could be getting excited over nothing, but seriously this could be as smooth as Arrow and Flash with casual crossovers that don’t feel forced. Jody has plenty of experience fighting monsters, a sad love story (really two sad love stories) and a teenage daughter to help with the younger audience.

OK to move on from my fantasizing over this spin off that will probably never happen here are the top 5 moments from this episode:

5. Jody and the Winchester’s banter Jody is the closest thing they have to a mom right now. Jo filled that role for a little while, but after she was gone Jody stepped up to that role a little bit. She respects what the boys do, but isn’t cowed by the fact that they are Winchesters. Even with someone tearing people apart the boys seem more relaxed with her around.

4. Jody standing up for Donna At the start of the episode we see Donna getting trampled on by her ex-husband and even though Jody is uncomfortable she doesn’t do anything about it. Then we see it over and over again. He keeps making comments about her weight, her personality and is obviously trying to hook up with someone at the retreat. So it’s awesome to see Jody lay into him. Donna, of course, didn’t appreciate it at first, but I think after her moment witnessing a vampire for the first time she got over it. And became awesome.

Come on– we were all thinking it. And we’ve all known this guy.

3.  Donna standing up for herself. We saw her getting treated poorly the last episode she was on and then for over 30 minutes of this episode we saw her put up with more than any woman should ever put up with. So even though she wasn’t standing up to her ex it was glorious to see her stand up to Dean– and then get it done at the end of the episode.

and this this moment:

I really have grown to like her character– but that smile right there– she would have made a creepy villain.

2. Jody and Donna practically cosplaying Dean and Cas. Cause– I mean really:

1. Dean being so defensive of being an FBI agent. I literally laughed out loud. Which was impressive since I was laying in bed with strep feeling like crap. He was so angry at that cop mocking his job. This is what I love about this show. If it was just a straight up horror/monster show I don’t know that I would watch it. However moments of humor like this is what makes it for me.

Overall this was a very solid episode and I hope with everything in me that Jody Mills gets a spin off show. I’m not holding my breath though.

From the look of next week’s midseason finale we will no longer be riding the love wave between the boys.  I really hope they end up supporting each other and aren’t back where they started. I’m also curious to see what Crowley has done with his mom. Plus I wonder if Crowley helped cure Dean because he wants him human to use the Blade. Maybe he’s too powerful to manipulate as a demon? We’ll see what is answered next week, but I’m sure we’ll have even more questions too.