Another week and another Game of Thrones wedding.  Let’s just go ahead and say if you have not watched last night’s episode stop reading now!  As always this post will be full to the brim of spoilers so you have been warned. 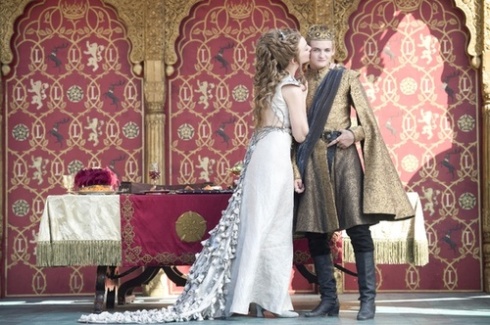 Before we start with the wedding lovelies let’s talk about all the other random scenes that didn’t seem important now. Well at least to those who don’t know what’s coming.  The episode started out with a hunt involving The Bastard Ramsey Snow, some chick named Miranda that I for the life of me can’t place who she is or where she’s come from, Reek– the artist formally known as Theon Greyjoy and their prey– a poor, short lived girl.

We got to see the girl get chased down, shot by Miranda and then get eaten to death by Ramsey’s dogs.  The changes in Reek are very obvious in this episode.  He’s timid, beaten, and too scared to fight back.  As much as I hated Theon he never deserved all that The Bastard has done to him.

Stepping outside of the box though I just want to say the actor that plays The Bastard (Iwan Rheon) is one of my favorite actors.  He was both parts creepy and heroic on Misfits and I’m both scared and excited to see him continue with this role.  He will be one of the great villains this story needs.

Things you need to know about The Bastard:  He’s scary (yeah I know you know that).  Scary as in he scares Roose Bolton and if you can scare a man that would kill his King at a Wedding in exchange for Winterfell that’s saying something.  Also there has been a ton of torture and nastiness that you haven’t gotten to see.  He’s also about to have a wedding, at least if they stick to the books, however not as exciting a one as you’d hope.

We also got to see Bran this go round and feel his frustration.  One thing they did show, but I don’t think explain well was what happened when Bran touched the Heart Tree.  So:

What you need to know about Bran:  when he is hooked up to the Weirwood he can see what any heart tree has seen, wherever, whenever.  There’s a lot more to it then that, but that’s why he saw his dad and all those other images.

We also see some scenes with The Red Witch and Stannis.  Stannis’ wife is gleefully watching her brother burn to death.  Needless to say there are some issues there, but mostly we are just being reminded that they still exist and stuff is about to happen there.

Now let’s move on to the hard stuff.  Cathy will join me for this part of the discussion.

I found this next set of images on Tumblr and I thought it showed more than I could explain:

This photo set speaks to a book theory that I’ll talk about at the end, but I thought it was fitting here.

How many of you cheered out loud at the end of this episode?

I remember throwing the book across the room when I read the Red Wedding, and I refused to continue reading for a few days. In stark contrast, never in all of literature or film have I ever been happier when a character died than when Joffrey did.

I relished in the happiness until I realized that Tyrion was going to be blamed for his death. Oddly enough, Tryion’s journey after this moment is one of my favorite character subplots. I’m very excited to see how the show portrays his journey.

Joffrey dying is going to have the same effect as Ned dying.  The storylines of the denizens of Westeros are going to be shaken up, people will be scattered across the realm, and much chaos will ensue.  I for one cannot wait.

If you’ve read the books, you know who slipped Joffrey the poison. If not, I won’t spoil it. One detail I noticed was that after Joffrey cuts the pie with the sword, the camera focuses on some dead birds in the pie. I was wondering if that was a clue that the poison in the show’s version was in the pie, not the wine as it is in the book. I’m not a stickler for keeping everything the same between show and book, if it was in the pie, then that’s a fun little change for the show. We shall see.

OK me again.  Joffery needed to die. So therefore I was worried that he therefore would live a long and happy life killing whores in his room with crossbows.  Once again I’m going to issue a warning.  If you are a watchling (aka someone who hasn’t read the books) I’d recommend you stop reading now as I’m going to throw out some theories that if you haven’t read through book 5 will ruin some things for you.

I’ll give you time to navigate away and just post this other awesome photo set:

So much emotion.  Too bad in reality Sansa is still a clueless twat.

OK back to those theories and spoilers.  We see Margaery’s grandmother go up and straighten Sansa’s necklace (which took place of the hairnet in the books) and what I didn’t notice last night, but expected was this:

We see a jewel missing from Sansa’s necklace.  A jewel that is in fact the poison that kills Joffery.  My assumption?  The grandmother takes the jewel here, then passes it off to Margaery  who slips it in Joff’s cup between his drink before cutting the pie and the drink he has after his first bite.  After all Margaery is the one that takes the cup from Joff and sets it down on the table while the pie is being cut.

Ser Dontos runs off with Sansa setting her off on her next adventure.  An adventure full of just as much excitement as before.

So about what I said about the Tyrion/Sansa photoset.  It is stated in the books numerous times anytime someone is exceptionally gallant that they are like Rhaegar.  Jamie and Cersei have little honor (Jamie much more than Cersei), Tywin has absolutely no honor either.  So where does Tyrion’s honor and sense of morality come from?

In the books it’s stated that The Mad King was unduly interested in Tywin’s late wife and that Tywin resigned as Hand quickly and returned to Casterly Rock.  My thoughts?  Perhaps the Mad King raped or more likely had an affair with Tywin’s wife and Tyrion is the result of that.  The holes in this theory are that I would think that Tywin would have killed Tyrion as an infant if that was the case, but also Tywin is in it for the long game so maybe Tyrion was meant to be kept as insurance against the Targaryens.

Tyrion does talk about his fascination with dragons a lot so perhaps one of Dany’s dragons will end up being his.

What are your thoughts on my theories?  I have many many more– mostly involving Jon Snow– but we’ll get to those later.

Up next: Where is Dontos taking Sansa, what will happen to Tyrion, who else is going to die?

Join us again next week!

2 thoughts on “The Lion and The Rose: The Purple Wedding”